Christopher Kennedy Lawford Talks About His New Book – Along with Patrick Kennedy. 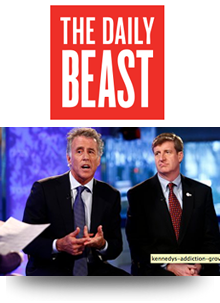 “I don’t know. You’ll have to ask God that,” he tells me. “Because, truly, I died basically four times and I should be dead. That’s what happens a lot. My father died of it. My cousin David died of it. I believe their deaths are what ultimately got me sober—and keep me sober today.”